We Come As Aliens

by Vic Godard And Subway Sect 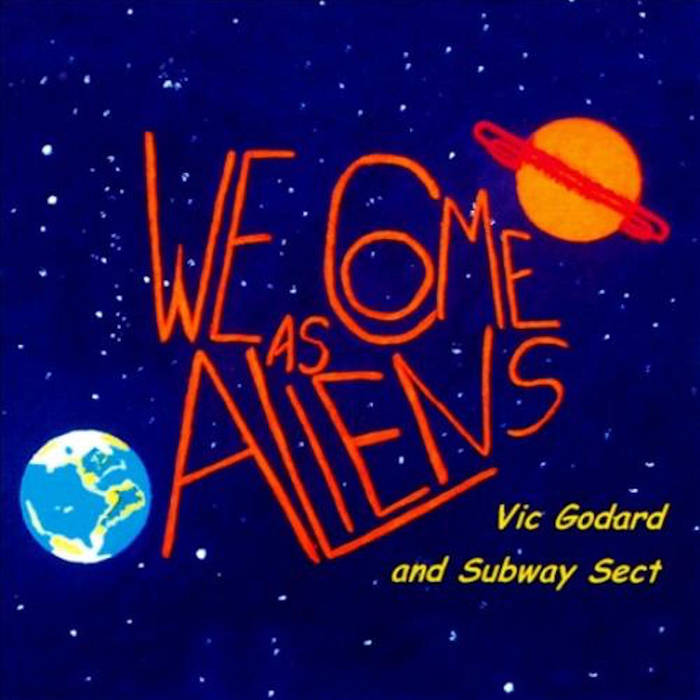 This set sits effortlessly alongside Vic’s late 70's output, but it is far more than that; in fact it’s unlike anything else I’ve heard in a long time. Vic uses his voice as an instrument as he snarls, croons, and yes, sings his way through the songs; subtly adjusting his tone and delivery according to the style, tempo, and subject matter of the narrative.

So, what of the narrative? His love of song writing, and his need to be a songwriter emerges in different guises throughout the album. It’s a central part of his psyche. On Best Album he declares, “We’re not gonna leave until we’ve done, until it’s the best album in the...” but never gets to say “world.” It’s as if he knows this goal is unattainable, but he really would like his album to be the best! Midway in the set is Rhododendron Town in which he confesses, “Once in my life I was through with it, panic over now my lifestyle's sound” while “saving up his best till laters, karma consonants and vowels.” Perhaps he is coming to terms with his vocation as a musician and songwriter and is determined to give us his very best? This fascination with song writing also closes the album, with the haunting Music of a Werewolf laying bare his insecurities with his craft. “Getting in a tiz and blundering, wondering whether there’s a pen or pad about.”

It’s hard to pigeon-hole the style of the album, other than to say simply, Vic Godard. Whereas That Train elevates its own imagery with hints of bluegrass and gospel, played with a beat of a train thundering along dusty tracks, Takeover reflects a despairing and forlorn call to arms with lashings of spiky guitar. He’s taking on the apathy that is the human condition; “Answer stares you in the face; still you won’t pull out of the race.”

The frustration with his fellow man at accepting the continuation of the status quo makes another appearance during If We’d’ve; “If we’d’ve had the nous to pool our single selves together.... we’d’ve trounced all them.”

Politics - both party and personal - are central themes (the old punk spirit is here – no fear of that). The Same Plan has a pop at Lord Mandleson with the realisation that whatever the “modernisation” being proposed, “it will always be the same plan,” while he ponders “how come they always bomb the poor” during Out of our Zone.

Dry humour is never far away, but excels during the observational Somewhere in the World which contains the funniest lyrics on the album: “Tea-leaf Keith sneaked, gate full of teeth, looking to all the world a savage. The Post took him on, regretting it from then on; mail’s piling up inside his garage.” Haven’t we all wondered where that missing parcel ended up?!

There’s a change of feel during proceedings as Vic tackles Francoise Hardy’s Et Meme. It’s not out of place as the energy and snarled vocal delivery places it firmly in Subway Sect territory and makes you sit up and take notice. Is there a touch of irony in the performance or is Vic deadly serious? Perhaps both. Whichever, it’s engaging.

Ne’er sums up the Subway Sect and Vic’s present day philosophy as he again lays bare his musical quest; “My dreams bring music striving daily to perfect soul, until the bits get knocked out and mixed up in the Sect bowl.” You see, he really does want to write the Best Album in the world, ever! His own left-field, off-beat, derivative outlook, style and unique musicality, puts paid to this lofty ambition. Did I say Ambition? We Come As Aliens has a direct lineage back to their classic 1978 single; the feeling and spirit is still evident. Only sharper.

Don’t believe me? Just listen to the wonderful, in your face, punk rock cry of Back in the Community. The song distils society’s ills down to the selfishness of modern day life and urges us to “get back in the community and take lessons in humility.” It’s an outstanding song and performance, with lyrics that ingenuously write in Blakey and Butler from On The Buses; “I’ll have you!”

The 13 tracks are awash with catchy melody and compelling storytelling. It’s simply brilliant. Just buy it!